So, we already have a great thread going, concerning the iOS 12 public beta over here

I, therefore, thought it would be great to have a separate thread concerning the macOS Mojave public beta.
Which features do we love, which do we hate, what problems do we encounter, tips, tricks, and so on.

Personally, I’d love to go first, but I’m currently downloading the beta as I type this, but I’ll be installing soon, on my only computer; my trusty MacBook Air.

When I’ve tested it for a day or so, I’ll post my initial impression of the OS, and of the beta.

Meanwhile, anyone up for it, are more than welcome to post your experience, bugs, etc.

So, without further ado - let the testing begin

Thanks for starting this thread, @Tonny_Bukdahl!

I’m wondering if any brave beta testers have found that any/all of those resilient external USB-C monitor issues (freezing, crashing, not waking from sleep, etc.) have been resolved? I’ve read that laptop user with external LG Ultrafine monitors have been most affected by the bugs. In my case, my iMac Pro crashes and reboots every minute or so with my 4K LG Ultrafine attached (only AFTER upgrading to High Sierra). Hoping they’ve cleaned up the mess in the Mojave beta!

I decided to install the Mojave beta to an external drive so I could test the monitor situation. I’m happy to report that the constant crashing/freezing/rebooting issue is gone. Can’t speak to the Macbook issues, but it appears that the iMac Pro external monitor nightmare may be over! Hallelujah!

I’m wondering if any brave beta testers have found that any/all of those resilient external USB-C monitor issues (freezing, crashing, not waking from sleep, etc.) have been resolved?

Interesting point, I’ll admit I’m seeing far less crashing from sleep with my MacBook and LG Ultrafine - I’ll have to pay more attention, but can’t think of a kernel panic at all since downloading on developer launch.

For me I thought I’d love dark mode, but I’m still having some trouble adjusting to it. The color scheme is beautiful, but it’s really easy to get lost with multiple apps on screen as they all look very similar. Notes also has an odd look with that page background graphic

I made the jump and installed it on my main laptop. Good news - all of the standard apps seem to be running without issue.

Citrix Receiver has been a bit flakey, periodically crashing at startup, but for some reason it does work occasionally. Yeah, I don’t understand it either! If you use Citrix, I’d advise you to hold off for a couple of releases.

I got the 32 bit warning the Citrix receiver I installed for university. I’m not sure if that’s true for everyone’s version though. (on High Sierra)

I’m currently on dev beta, what are the differences?

Also I found that Safari logs me out of both YouTube and Twitter, I can’t open tweets, so I can’t reply to tweet from Mojave, super weird!

Anyone else run into this issue when installing Mojave Beta 2: 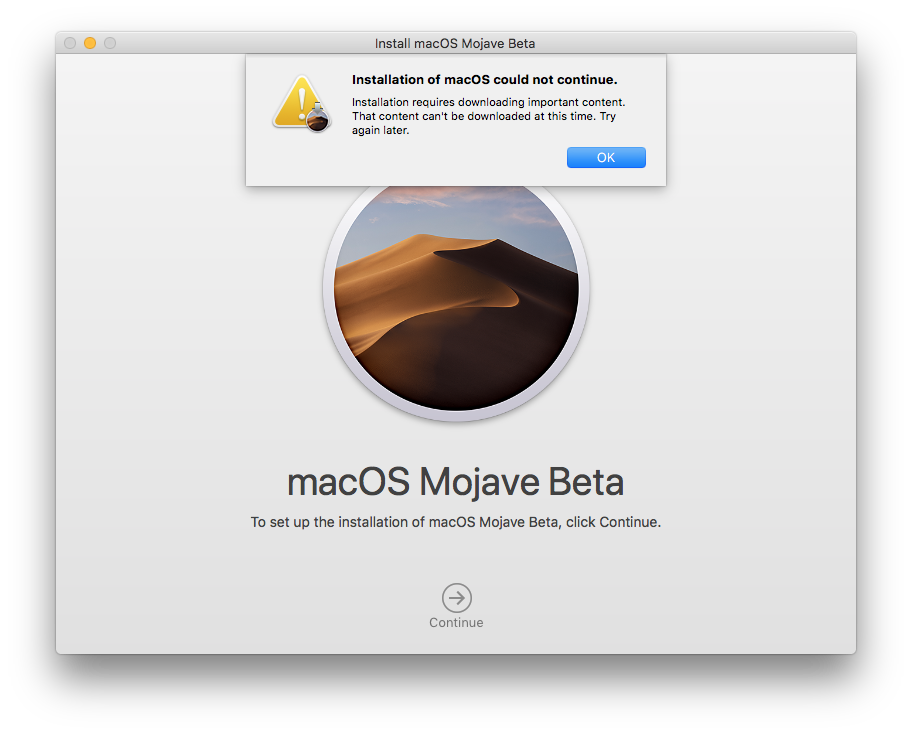 I was able to install beta 1 and 2 on my 2015 MBP without issue. I’ve been running my own tests and everything looked to be pretty solid so I thought I might install the beta on my 2017 MBP as well, but I keep running into this error on installation.

I’ll have to pay more attention, but can’t think of a kernel panic at all since downloading on developer launch.

I spoke too soon, my MacBook Pro was off this AM and booted up with a panic report - still, I’ll keep an eye out for more common issues in the past like screen flashing, display crash after unplugging USB-C etc.

I have only been using Mojave for about 8 hours straight, but … wauw is the first thing that comes to mind

I’ve gone for the “dark mode” and it really suits me the way the colors have been chosen. It’s absolutely amazing

And how about the revamped App Store - a really great improvement, if you ask me

Okay, so I think we’ve established, that I’m a huge fan of the look and “feel” of macOS Mojave.
So far I have no complaints really, other than the occasional OS slow-down (which is to be expected this early on in beta testing) but I’ve only experienced a serious slow-down twice in the 8 hours I’ve been a Mojave user, so far, so I’m not really too bothered about this, since it’s not really impacting my day to day use.

Of course, there are a couple of my apps that refuse to run, but again - that’s to be expected. Fortunately, it doesn’t impact my day to day use, since those apps affected aren’t any of my essential apps.

So all in all, I’m a pretty happy camper so far

I just installed the beta this morning. It was really bad timing for me because right when I finished the install slack started having connectivity issues so I was freaking out for awhile before I checked their twitter and saw it wasn’t just me. I am happy to report so far so good with most of my main applications. The new apple news app has been crashing consistently for me though. Is anyone else having this issue?

Question about Mojave. I don’t plan to upgrade until final version comes out. I would like more information about screen recording. Is there a separate app? How do you get to it? Do you have to take a static screenshot first? How does it compare to Quicktime? These questions were unclear to me from the keynote. I still do most of my screen recording in Screenflow, but I’m curious about this new feature.

@nlott 9to5Mac does a good job of highlighting screenshots at the 3:12 mark in their 50+ New MacOS Mojave tips video

I upgraded to the public beta last night and have been using it all day. The only issue I found so far was that the pop up window to connect to StarBucks wifi didn’t work. I tried several times, turned wifi off and on to no avail. It was only after I connected to my iPad Pro 12.9 hotspot, and tried Starbucks again, that it connected. The pop up window still didn’t work right, but I was online.

Weird I know. I reported it to Apple.

Other than that, I really like dark mode. I’m wondering if that will extend battery life? I hope so

My big issue that I don’t know how to resolve is that they’ve pulled out screen sharing. I really need to file a radar, and maybe feedback on the public beta too.

Otherwise, no real issues that weren’t expected… AdBlock got kicked out of Safari, as did the Pinboard.io extension I use. Both are frustrating…

No showstoppers though. I’ve only installed the dev betas onto my MacBook (a work machine) so far. I’ll probably install the public beta onto a laptop, but I’m concerned about losing screen sharing.

Can you skip High Sierra and install it on a Sierra machine?

Haven’t done it myself, but my general belief is that if the machine supports Mojave, you should be able to install the public beta.

For good measure have a backup of your OS before going ahead, but other than that I’d say give it a try

That should work. Before I try anything like this, I always do a Time Machine backup and a Super Duper! disk image. Because paranoid

I did that last summer, and put High Sierra beta on my 2015 MBP 13", and it switched to APFS. Later, when then High Sierra release came out, I restored from the Super Duper! disk image first (which put it back to HFS+) and then smoothly upgraded to the release of High Sierra.