In the last week or two (maybe starting with 12.3?) search on my iPhone (Xs max) has stopped working properly. It used to be that it you started searching for an app by name (or contact or anything really), the results would show up near instantaneously—even as you type. But that doesn’t happen anymore.

Instead, when I search for an app name, nothing happens at all for somewhere between 10 and 30 seconds. Then the expected search results flash on the screen for just a moment before being replaced with a screen with no results and just the options to “Search Web”, “Search App Store,” or “Search Maps.” After another 10-20 seconds, i finally see the normal, expected search screen.

To me, this seems like it must be some sort of cache issue or similar. But I’m wondering if anybody else has seen anything like this, or if anyone has a suggestion about how to fix. (Things I’ve tried so far: power down/power up; hard reset; turning off siri search suggestions (of all types, then turning the back on, same with restarts in the middle). Is there any way to force Siri to rebuild it’s search index?

I am having that exact same problem (again) with my XS Max.

I also had it a couple of months ago. Wiping the phone and restoring did not help, presumably because the Spotlight index (that I assume had gotten corrupted) was corrupted in the backup.

When I took it into the Apple Store they had me Settings > General > Reset All Settings (I think - it might have been Reset All Contents and Settings). Then I went home and re-downloaded all my apps, and everything was back to normal.

For a couple of months only.

Doing that was a giant pain, not only because I have hundreds of apps installed, but because some WiFi hotspot passwords I’d accumulated (in that iTunes backup I didn’t want to use, and which I couldn’t otherwise get into) were no longer available to me, and I hadn’t thought to write them down in a file for safekeeping.

Some people who have had similar issues have found they could fix the issue by going into Settings > Siri and Search > Language, and then changing the language to another (eg ‘English (Ireland)’) then shutting down (up volume, down volume, then press-hold the sleep/wake button until the shutdown slider appears), followed by a restart.

Unfortunately, that did not work for me.

With macOS the issue is a corrupted Spotlight index, and it is trivial to rebuild the index. Not so for iOS.

Sadly, this is a not too uncommon problem. I’ve seen other people with XS Maxes discussing the problem on Reddit, and I found a couple of people in Apple’s forums discussing it as well:

The following article discusses the issue and offers suggestions, including the ones I mentioned: 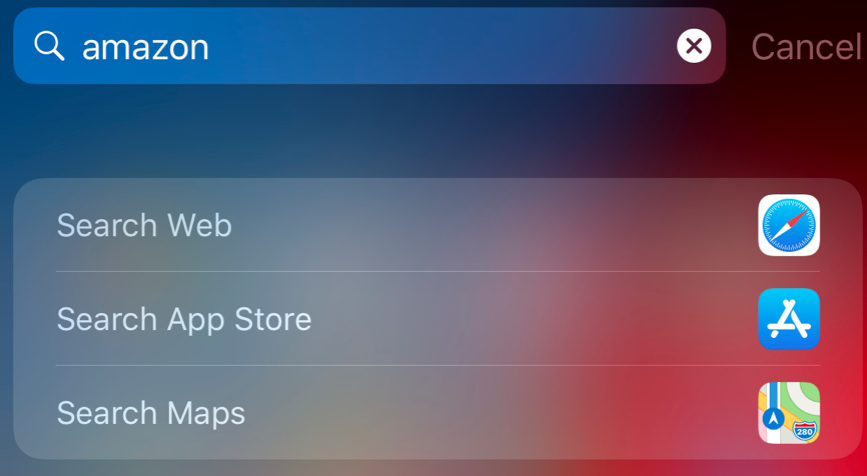 Some users who updated to the latest iOS version are finding out that Spotlight Search is not working properly. More specifically, while some users are

That’s discouraging. After going through an Apple support chat in messages, I’m going to an Apple store this afternoon to see what they can do, though I suspect they’ll just force me to wipe/restore as new.

Have you noticed any other issues? I found that my phone is using battery far faster than normal and that it sometimes gets hotter than I would expect (e.g. when taking a bunch of photos as my son’s last day of preschool) and, though it seems unlikely, I’m wondering if it’s related.

And search inside Settings is completely broken - won’t give any results at all.

I was able to slightly speed up app search by turning off the three ‘Siri Suggestions’ sliders in Settings > Siri & Search.

My last encrypted iPhone backup was 4 days ago, so that backup is no good for a restore, unfortunately. So unless Apple comes out with an iOS update in the next couple of days (a beta is possible, given that WWDC starts tomorrow) that might offer a reset, I’ll probably have to wipe/restore…

Yeah, the only upside is that if things are messed up anyway, I might be more inclined to get on the iOS 13 beta.

If you go to the Apple Store for support on this, please come back and report on what they advised or did.

Couldn’t make it today unfortunately. May have to try next weekend since the only Apple store close to my office is closed for extended renovations.

I have the same problem with spotlight search being VERY slow. Settings search is DOA. Toggling language/region doesn’t work for me either. Neither does restarting. I am also noticing a lot of lag in random operations.

The battery drain and slowdowns in operations are plausibly explained by iOS constantly trying and failing to reindex Spotlight,

And the very slow appearance of search results is because iOS is giving results from a new reindexing (which it seems unable to save, and therefore has to do afresh each time).

Just to report back:

I went to the Apple Store where they confirmed there’s nothing physically wrong with my phone. They agreed that it was probably some sort of corruption/software issue, but that there was no fix-in-place options.

They had me to a clean install, and set up as a new phone (they said if you restore from backup, you might just import the corrupted index).

I’ve done that, and aside from the annoyance of setting up a new phone, all seems to be working well.

Thanks for the follow up. That’s exactly what happened with me, unfortunately, and it looks like what I’ll have to do again to my xsMax.

I did a backup/restore and it seems to have fixed the spotlight search, but not the search within the Settings app. I am going to give it a day or two then decide how much I care.

Hmm, maybe I’ll try that too. Today I was trying to change a setting and couldn’t figure out where it was in Settings and I ended up Googling for the location. (Turns out it didn’t exist, but was a setting in macOS.)

Missing search in Settings is annoying, but missing Siri search was a deal breaker for me. The prospect of backup/restore actually seemed less daunting than resetting settings, then hunting and pecking them back to place.

Update: 24 hours later, Siri Search and Settings Search are fully operational. If you’re considering a nuke and pave or Settings reset, you might want to try backup/restore/wait first.

Wow. Okay, trying that tonight then.

Was your backup an old one or one made while you were still having problems?

I made a new one. I wasn’t sure when the problem started, but it was going on for at least a couple days. Plus I wanted to back up my watch. So I unpaired it and did an iCloud backup.

Thanks… I didn’t want to do an iCloud restore because I have hundreds of iOS apps installed and restore takes forever. Restore from an encrypted iTunes backup takes less time. But if your restore was from a recent backup I’ll just try doing the same from iTunes.

I’m having the same issue in both my iPhone and iPad.

@evanfuchs just to be clear: you did an iCloud backup, wipe the device and then restored from the backup?

Yes. I unpaired my watch to force a backup to the phone. Then I did an iCloud Backup. Wiped the phone, restored from backup when prompted. Repaired my watch. Then waited for everything to download.