Siri shortcuts action does not support OF2

This morning I tried to run one of my workflows on a device that’s been upgraded to iOS 12 and Siri Shortcuts. It gives me an error message saying I need to have OmniFocus installed: 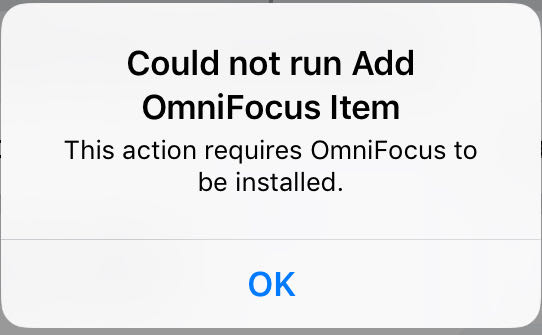 This made me wonder if the iOS 12 upgrade had somehow messed up OmniFocus on my iPhone, but no, OF fired right up without any problems. I took a look at the shortcut in the Shortcuts app and it also says I need to install OmniFocus, but this time it has an App Store link:

It takes me to the app store page for OmniFocus 3. That’s when it dawns on me that the problem is probably that I’m still running OmniFocus 2. I’ve been holding off on upgrading until OmniFocus 3 for Mac is available. OmniFocus workflows are important enough to me that I’ll have to upgrade to OF3 on my iOS devices. Maybe I should just go ahead and install the OmniFocus 3 for Mac Public Test too.

Just a heads up for anyone who’s still on OF2. You might want to hold off on upgrading Workflow to Shortcuts until you’re ready to go to OF3 as well.

The good news is OF 3 for Mac went into open beta yesterday, and releases on Monday

Yep. Since I’ll be out of town and iPad only for the second half of this week I’ve decided to just wait and install the release version after next Monday​.