Time to rip off the Evernote bandaid - can you help me to chose my new "Evernote"?

Hello Everybody,
I have been a customer to this company is 2008, I think I was a customer from the very beginning. I even bought the Evernote Scanner for my needs to scan papers, letters, books, photos. Everything was OK until I discovered that Evernote will not upgrade the scanner software for Catalina. Now my pro.subscription ended and I was offered a discount of 40%, which does not work for me. Evernote does not reply to my support cases and closes them down. I feel it’s time to rip the bandaid. But HOW? Today I have several of gigabytes of PDF-files, lots of e-mail I have sent to my Evernote e-mail account, lots of tags, stacks and notebooks. I am sure that a couple of you already have done the travel I am just about to start.
I think you already know the question:

How do I export “my stuff” and to what software? (I am allergic to OneNote, so that’s a no)

I hope to do the minimum of work to export and import to the new software.

The two main Mac/iOS apps that allow for easy import of Evernote files are OneNote (which, allergy or not, isn’t bad at all) and Apple Notes.

Import your notes and files to the Notes app

Take the text files that you created in other apps, and import them into the Notes app. Then you'll have all of your notes in one convenient place. 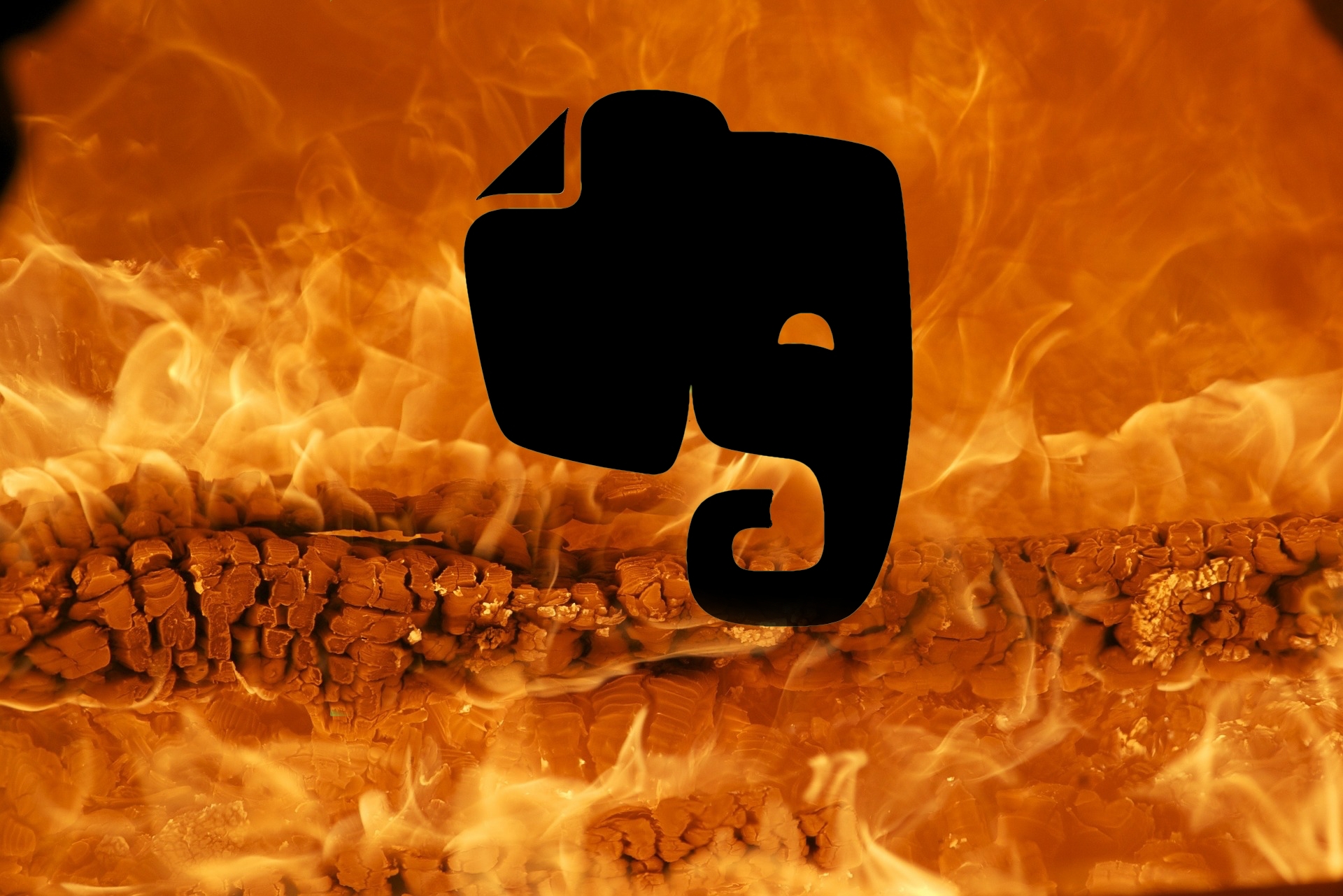 TipBITS: How to Move Your Evernote Notes to Apple’s Notes - TidBITS

Evernote, the company behind the popular note-taking app, appears to be in trouble. If you’re worried about Evernote going under, now may be a good time to transfer your notes over to Apple’s Notes app for safe-keeping. Here’s how.

You might find this thread about others’ renewed hope for Evernote interesting: Rumors of Evernote’s demise have been greatly exaggerated

I use DEVONthink tools myself. A lot of people have written about how to jump from the Evernote ship to the DEVONthink one!

Popular Alternatives to Evernote for Windows, Mac, Web, Android, iPhone and more. Explore 25+ apps like Evernote, all suggested and ranked by the AlternativeTo user community.

I like Bear a lot. I know it’s really designed as a writing app, but I use iA Writer for writing, and Bear’s worked well for me as an Evernote replacement. Plus it’s only $15/year.

There’s no PC version and no web interface though, so your PC will be left out in the cold, which may be a dealbreaker.

Edited to add: Bear provides an explanation of how to import from Evernote that includes both tips for an improved import experience and cautions about the limitations of the process.

I hope to do the minimum of work to export and import to the new software.

Unless the Notes importer has been greatly improved in the last couple of years, all I can say is it is better than nothing. I too had a ton of pdf files and all survived the import. Text documents lost a lot of formatting, no spacing between paragraphs, etc. Bookmarks were basically worthless after import.

I later moved all my PDFs from Notes to Google Drive because the full text search is much better than on my Mac or IOS. I still keep some text in Notes, my lists & bookmarks are in Google Keep.

It’s a shame what happened to Evernote. They really were the best at what they do. If they can get their problems sorted out I might be tempted to get them another try.

several of gigabytes of PDF-files, lots of e-mail

My question would be, “How much of that is still relevant?” I’ll bet that if you spend some time to go through all this stuff and weed out what you haven’t looked at in years and what isn’t even there anymore, that you could realistically cut it significantly. That would leave much less to export and maybe open your options for other platforms.

Just save an .enex file with everything in your current account for an archive and put it aside. Then begin cleaning house in Evernote and see what options open up for you.

For people with a lot of PDFs, I would recommend using a reference manager like Bookends.
I suppose its utility might depend on what the PDFs are for. If the metadata stored by Bookends (author, title, year published, abstract, etc.) doesn’t fit the PDFs, something like DEVONthink might be more appropriate.
Dumping everything into Notes doesn’t seem like a good fit, IMO.

I jumped from EN to DevonThink Pro and used this forum to help me do it.
The import ENEX tool was slick. The learning curve is steep but doable. I have been happy over-all. The new version 3 betas have some nice improvements, but mostly they modernized the UX.

DEVONthink: stuck at the bottom of the hill Software

The voice in my head keeps telling me to move from Evernote to DTP. I am stuck at the tinkering and time-sucking phase. Advice to get up the hill or to call it quits is appreciated.

Wow…this program is LOADED with features. I just purchased it…thanks for the heads up.

I don’t know if I want to replace Evernote with it, but it may take over a prominent place in my writing workflow.

I too moved from EN to DevonThink. It is a great app.

I have moved to Notejoy. It has a clipper like Evernote but currently only for Chome and Firefox and also like Evernote you can email in notes.

Keep It should be a good alternative. I’m going to make that switch soon as well

Keep It recently, finally clicked for me as a repository for reference material. Reliability and speed of sync have improved a lot. The near parity in features between iOS and macOS, along with the nicer UI/UX makes me prefer it to DevonThink. Being able to create saved searches on iOS is particularly nice.

I do not use it for notes much, though. Support for Markdown could use some enhancements:

Keep It recently, finally clicked for me as a repository for reference material. Reliability and speed of sync have improved a lot.

Good to hear. Right now I’m still mostly using Mac-only EagleFiler, and have dipped my toes in the Notebooks water, but haven’t fully gotten wet yet.

DEVONthink is a real power tool.I would go for that

Notebooks looks interesting however essentially they have the same business model as Evernote - they are a ‘pure play’ notes application/company. If Evernote struggles making their business case work is there any reason to think Notebooks will not eventually have the same problem. I am heavily invested in Evernote and prefer to migrate to another notes app one time. In other words, I’d hate to migrate to Notebooks then have to migrate to another note platform in the future. (Of course, nothing in certain with OneNote or Apple Notes too).

I tried whole-heartedly to move to DT, but it just seems like overkill for my needs. It worked well, but with the upgrade to DT3, I just can’t justify the expense.

Also tried Notebooks, but something just doesn’t click with me, don’t know what it is, but stuff just didn’t go in easy or come out easy.

For now, my bucket is EagleFiler, like @bowline It just needs an iOS client…

Notebooks looks interesting however essentially they have the same business model as Evernote - they are a ‘pure play’ notes application/company. If Evernote struggles making their business case work is there any reason to think Notebooks will not eventually have the same problem.

Apples and oranges, I think (maybe apples and ceviche): one’s a service with server costs and thousands of employees, the other is a typical indie developer. And the products are different too, despite their commonalities. Dinging Notebooks would also be dinging apps like Keep It! and even DevonThink.

For now, my bucket is EagleFiler, like @bowline It just needs an iOS client…

For now I’ve just decided to keep using EagleFiler on the Mac, and either migrate files to it from iOS when needed, or else I use Apple Notes (and Google Keep, and Ulysses) for cross-platform stuff.

I’d love to find a single replacement for EagleFiler (as the dev has expressed zero interest in an iOS app) but with the periodic reports here and elsewhere of sync issues with some apps using iCloud, and my not wanting to upgrade my Dropbox account, I’m content to make do for the time being.

I have Notebooks and the latest version is quite nice, but I’m just really conservative about switching, and I’ve had three good years with EagleFiler (and nine mixed years with DevonNote/DevonThink/DevonThink Pro before that).

3 Likes
Systems vs. Apps
next page →